Reverend Sean Kulacz will  be installed as Pastor of Holy Family and St. Emery’s Parish on June 21, 2020

A memorial mass will be held for Father Emeric who was a Franciscan Priest and who served at St. Emery’s Parish for 19 years during Father Robert Nemeth’s tenure (1977- 1978).

Father Emeric had been in retirement in St. Petersburg, Florida. He was a beloved Hungarian priest.  Please join us to honor his memory and service to God. 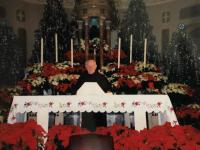 In peace — may his soul rest in peace.

Father Nemeth was St. Emery’s longest serving Franciscan Pastor covering 21 years from 1977-1998. Father Robert was a very beloved Priest at St. Emery’s Parish as well as in the town service communities. Father Robert was responsible for obtaining the rare stained glass windows in 1981 and several other restoration Church projects prior to 2000.

Plaque in front of the Church commemorating Cardinal Mindszenty’s visit to St. Emery’s in 1974. Cardinal Mindszenty is world renown for his steadfast support of Church freedom and opponent of communism under the brutal Stalinist persecution in Hungary.

Cardinal Mindszenty died in 1975 shortly after his visit to St. Emery’s and is enshrined in the Esztergom Basilica in Hungary.

The grand Esztergom Basilica is the largest Church in Hungary located on the Danube River and north of the capital of Budapest. The city of Esztergom, formerly the capital of Hungary, is the birthplace of Saint Stephen of Hungary.

Magnificent Altar inside Esztergom Basilica. Altar painting is by famous Italian artist Titian and is one of largest paintings in the World.