The Knights of Columbus were present during both Sunday masses adding to an elegant recognition of St. Emery’s 80-year history, crossing-the-path of so many people over many generations.

Separate coverage of this event is located on the 80th Anniversary website page.

Deacon Rudy has been the only Deacon to serve at St. Emery’s Church. He has been a dedicated servant to the Diaconate Ministry and provided St. Emery’s Parish with admirable service over the last 10 years. He has successfully guided the Parish though many changes while holding true to the teaching of the Lord.

The celebration began with a special Sunday 10:00 AM Mass at St. Emery’s Church followed by a 12:30 PM luncheon at Aldario’s Restaurant in Milford, CT.

Enjoy the following gallery of photographs of both the special Mass and luncheon at Aldario’s Restaurant. The photographs are the work of skilled photographers Chris Bleggi and Henry Kutash.

The Special Sunday Mass
(Before Mass)

Father Montanaro, St. Emery’s Pastor and Administrator and Father (Friar) Emeric Szlezak, who was formerly a Priest at St. Emery’s.

Deacon Rudy preparing for Mass in the beautiful Sanctuary of the Church.

Deacon Rudy and his wife Jean

Father Emeric, who is now retired, was a former and beloved Priest at St. Emery’s for 15 years. Father flew in from St. Petersburg, Florida where he now resides. Father Emeric is 94 years old.

Bringing the Gifts to the Altar

Deacon Rudy’s Grandchildren Alison and Emily Trankovich and Nicole and Vincent Ardito helping out during the Mass. 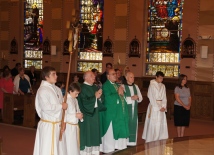 The Choir, with Organist Mr. Procaccini, performed beautifully during the special Mass.

The Special Sunday Mass
(After Mass)

Deacon Rudy greeting several of the Parishioners as they leave Mass to go to the Luncheon.

Henry Kutash, one of St. Emery’s skilled Photographers who along with Chris Bleggi, was responsible for the excellent photography shown in this Gallery.

Barbara Chuga (left) and Kathy Sherwood welcoming the guests at Aldario’s Restaurant. Kathy is President of the Church Advisory Council. Kathy chaired this successful affair and was Master-of-Ceramonies during the luncheon.

The St. Emery Priests were in full attendance for the luncheon including a guest appearance by Monsignor Joseph Pekar of Saints Cyril and Methodius Parish.

Father Montanaro spoke of Deacon Rudy’s biography including his 35 years as a teacher and Principal in the Bridgeport School System.

Father Emeric provided interesting insight about his ‘life-in-retirement’ in Florida.

Deacon Rudy was presented a silver-engraved plaque in appreciation for his service as a Deacon at St. Emery’s Parish.

Deacon Rudy and his Wife Jean

Zoiy and Marie Kassay (left) with John and May Kassay. Marie is Member of the Council

Mary Kocsis, Barbara and Greg Chuga. Barbara (center) is a Member of the Council

Barbara and Carroll Fencil. Barbara is a Member of the Choir and Carroll is a Council Member

Louise and Fred Miller. Louise is Member of the Choir and Fred is a Council Member

Karen Adams and Nikki Bleggi. Karen (left) is a Member of the Council

Deacon Rudy with Chris and Nikki Bleggi. Chris is an Altar boy and Nikki a Choir Member

Chris and Wendy Bleggi. Wendy is a Lector. Chris is a Member of the Council

Chris Bleggi, one of St. Emery’s skilled Photographers who along with Henry Kutash, was responsible for the excellent photography shown in this Gallery.

Carol Gladstone (right) with Friends. Carol is a Member of the Council

The Nuns who stay at the Convent enjoying the Luncheon

Bob Rouse (far right) and Friends. Bob is a Member of the Choir

Zita Szabo, Art and Mary Ann Corcoran (center-couple) and Helen Norton. The Corcoran’s are both Members of the Council

Andrew and Karen Orrino. Andrew is a Member of the Council

Entertainment was provided by Stan Danielczuk

The Planners and the Coordinators

A very large effort went into planning and coordinating this event. We thank the following people for this successful effort.

The St. Emery’s Roast Beef Dinner sponsored by the Church Advisory Council was well attended. Thanks go to parishioners Henry Kutash (organizer), Barbara Chuga (organizer), Marie Kassay (tickets) and many other volunteers for their hard work planning and organizing this enjoyable affair.

Enjoy the following photos taken during the dinner (click-on any photographic image to enlarge). 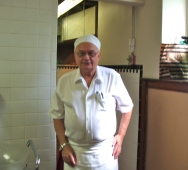 Henry Kutash (left), along with Barbara Chuga (below in red), were the main planners and organizers of this successful St. Emery’s dinner event. 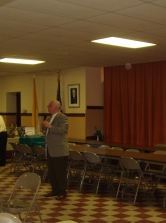 Deacon Rudy (left) providing the Blessing of the Food before dinner.

Father Montanaro (below) addressing the people during dinner wishing all an enjoyable evening. 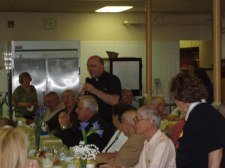 The Servers. Buffet is Open 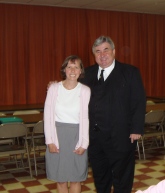 Bishop Bela Poznan and His Wife

Bishop Bela Poznan and his wife from the Hungarian Calvin United Church of Christ in Fairfield.

Deserts were as Abundant as Ever

Does not get any better than this!

The St. Emery chartered bus trip to visit the renown St. Padre Pio Shrine at Church of St. John the Baptist in New York City (201 W. 31st St., 7th Ave) went as planned on Saturday, June 2. It was a sold out affair.

The trip was organized by parishioner Mary Ann Corcoran (right photo with granddaughter) aided by her husband Art (upper right-facing photo) and in coordination with Pia Ramadanovic (President) of St. Margaret Shrine.

Although the day started as a rainy day, the weather turned into a beautiful sunny and an enjoyable afternoon in New York City.

The bus trip down to New York City —–

The Corcoran’s granddaughter. Kids know how to get it right!

The Millers (in back)

Church of St. John the Baptist
Shrine of St. Pio of Pietrelcina

Church of St. John the Baptist

St. Padre Pio is renown for his remarkable recurring stigmata and was canonized a Saint relatively recently in 2002. Stigmata are marks corresponding to those left on Jesus’ body by the Crucifixion.

The St. Emery NYC trip included a a guided tour of Church of St. John the Baptist, which has the largest collection of relics of St. Padre Pio.

Station of the Cross

Beautiful Stations of the Cross and relics of St. Padre Pio are displayed throughout the Church.

Following the Church tour, a beautiful recital of the Rosary was held at noon, which was followed by Mass.

St. Emery’s parishioners (right and below).

Father Franks and Henry Kutash and his Aunt

The Gardens of St. John the Baptist are located on the grounds of the Church. 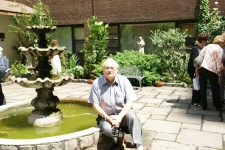 Departing for Little Italy for Lunch

Gennaro, martyred Patron of Naples Italy. This Little Italy feast is held in September for 11 days and is said to attract

over 1 million visitors every year.

Lunch was held at the Grotto Azzurra  in Little Italy. The Grotto opened in 1908 and famous for its past celebrities. They accommodated our group of 54 people very well and the food was very good. All enjoyed.

The St. Emery Ladies Victorian Tea was a delightful and entertaining affair. The Church Hall was transformed into an elegant setting with abundant fresh flowers and the traditional lace. The Ladies attendance filled the Church Hall on this beautiful Sunday afternoon. The Victorian Tea Menu was skillfully prepared and the service by the ‘British Maids’ was special. The entertainer, Kandie Carle, also known as “The Victorian Lady” was widely received and everyone enjoyed the performance. 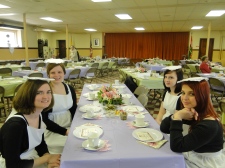 In keeping with the Victorian era, ‘British Maids’ were used to bring food and tea to the Ladies attending the affair. Clockwise seated, Veronica Dicso, Kimberly Scinto, Carol Ann Gladstone, and Nikki Bleggi.

The ‘British Maid’ in silhouette is Carol Ann Gladstone.

The doors opened at Noon and the event started at 12:30 PM but many people arrived early. Our photographers were on-hand.

From left, Karen Adams and Barbara Chuga. Barbara was one of the four main planners along with Kathy Sherwood (President of Advisory Council), Marie Kassay and Mary Ann Corcoran.

Karen Adams was one of many volunteers that helped with set-ups, cleaning and the large amount of food preparation.

From left, Marie Kassay and Barbara Chuga, two of the main planners, and Maureen Chuga in the elegant Victorian Hat.

There were several door prizes and all table flowers were given to the person who had the oldest dated coin.

Mary Ann Corcoran (standing). One of the Four Main Planners 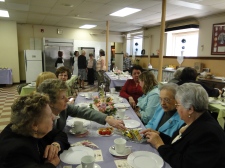 A serving of a variety of delicate sandwiches, a wide variety of Tea selections and abundant deserts.

Every table was served by the four lovely ‘British Maids’.

A choice of seven sandwich and pinwheel ingredients were offered. The sandwiches and pinwheels were all handmade by a group of several volunteers.

Special thanks to the Bigelow Tea Company for their donations along with Mary Horvath and Ethel Evan. 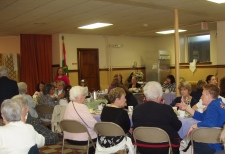 Kathy Sherwood (left in red in front of the Hungarian flag) is the President of the Church Advisory Council and the one responsible for conceiving and leading this event.  Well done! 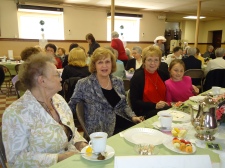 Entertainment was provided by Kandie Carle, a lady who demonstrates the fine (and funny) art of dressing in Victorian era style clothing.

Kandie with her ‘volunteer’ Assistant

Ready to Meet the Queen

All table flower bouquets were the prize of the person with the oldest dated coin on their person.

Our young  ‘British Maids’ made it through the party  —–

Twenty-Four people volunteered their time and effort to make the Victorian Tea a success. Many thanks to everyone. 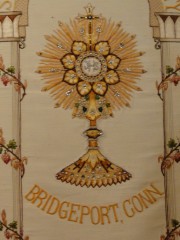 The tapestries were meticulously handcrafted to commemorate St. Elizabeth’s Altar Society (1917-1937) and to present the Monstrance, which displays the consecrated Eucharistic host. The letters IHS are the monogram of Jesus Christ. 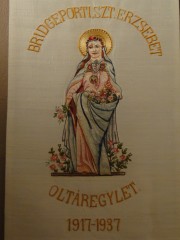 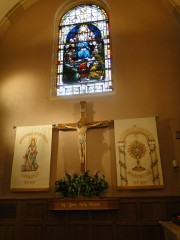 By Your Holy Cross. The Crucifix.

This Crucifix located on the wall between the two tapestries was refurbished and remounted during the 2000 restoration..